Over time, some encoding schemes have been used so frequently that they've formed a kind of basic vocabulary for puzzlers. Here are some things to look out for as you try to determine how to extract a final answer. 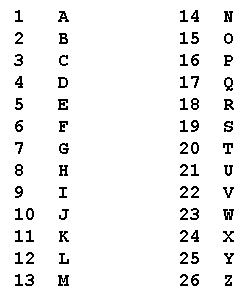 Another extremely common use of numbers in puzzles is as an index into other text. A clue with a number 5 next to it might mean that after solving the clue, the important thing is the fifth letter of the answer. Typically, a puzzle using indexing will require you to index multiple times, often using a different answer and number each time, to extract a series of letters which can then be read as something meaningful.

If the puzzle resolves to a list of answers and there is no numeric data to suggest indexing, the answer may be an acrostic, which is essentially an implied index of 1 for each answer.

Another slightly less implied index is the "diagonal read," that is, an index of 1 for the first answer, 2 for the second, 3 for the third, and so forth.

Base 10 is used most often, but you'll frequently see other base encodings in puzzles. Base 2 (binary) and base 3 (ternary) are used quite often in puzzles, especially for representing letters. Base 16 (hexadecimal) is also common for ASCII representations.

A stream of data with only two different values (black or white, true or false, dead or alive, 1 or 0, etc.) often represents binary values. The most useful binary values are five bits long, since that's the smallest number of bits needed to represent (a superset of) the numbers 1–26, which can in turn be converted into the letters A–Z.

Similarly, three ternary (base 3) digits will suffice to represent numbers from 1–26.

Numbers in the following ranges can represent ASCII codes:

You can read more info about ASCII here.

Common Representations of Letters and Numbers

Morse code is a system of communicating data using short and long pulses (also known as dots and dashes). Morse code can be encoded using two different symbols representing dots and dashes, and optionally a third symbol to represent letter breaks. A puzzle can also contain visual representations of Morse in the form of dots and dashes, for example, as stripes or emblems on national flags. 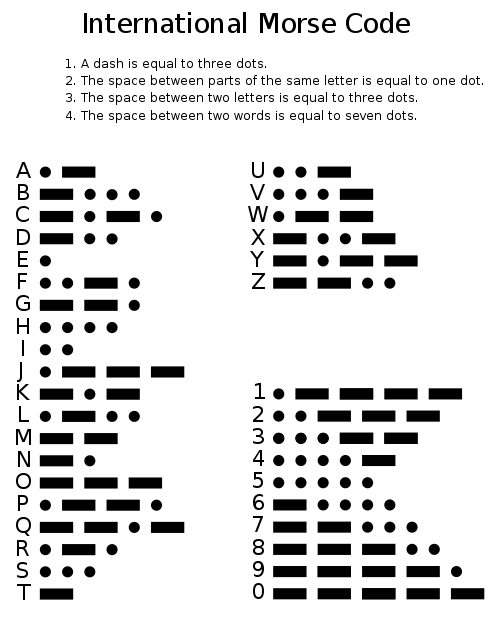 The following diagram is a handy way to quickly decipher Morse code letters. From the node labeled "start," travel downward across dotted or dashed lines accordingly. For example, following the dotted line twice and the dashed line once will lead to the letter U, which is represented by "dot-dot-dash" in Morse code. (Missing nodes indicate invalid Morse code letters.)

Flag semaphore, often called "semaphore" for short, is a flag signaling system in which the alphabet is represented by holding two flags at various angles from the body. In puzzles, if a data stream consists of compass directions, angles, or lines emanating from a common center, it might be semaphore. 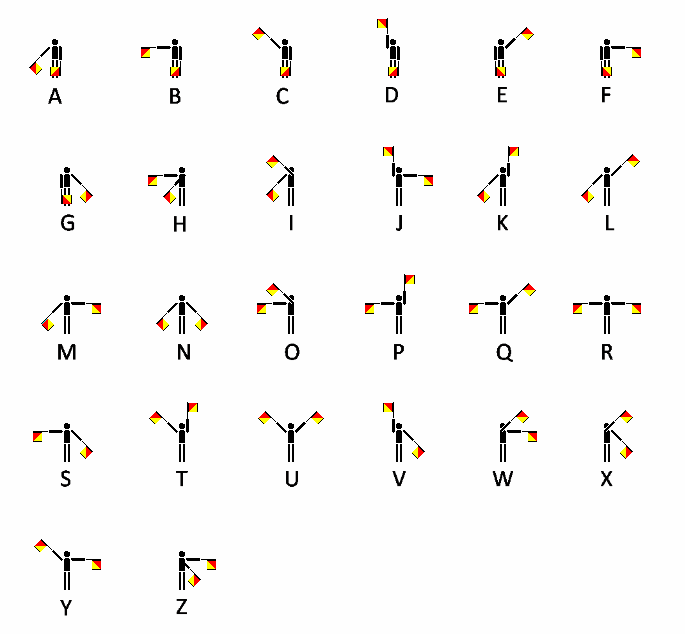 The following chart can be used to help decode semaphore quickly. If the two flags form a straight line, use the smaller circle on the left to determine the correct letter. Otherwise, find the appropriate pie slice among the other six circles corresponding to the two directions.

Braille is a system of raised dots used to allow non-sighted people to read by touch. Each letter in the Braille alphabet is composed of a 2×3 grid of dots, some of which are "on" and some "off." Any time your data can be subdivided evenly into a 2×3 grid, consider trying to treat it as Braille, especially if the instructions or flavortext use words like "touch" or "feel."

The system of international maritime signal flags is a way of representing every letter and number of the alphabet in signals to or from ships. They are defined by the International Code of Signals, or ICS. Each flag features a simple pattern in a palette of five colors: red, white, blue, black, and yellow. 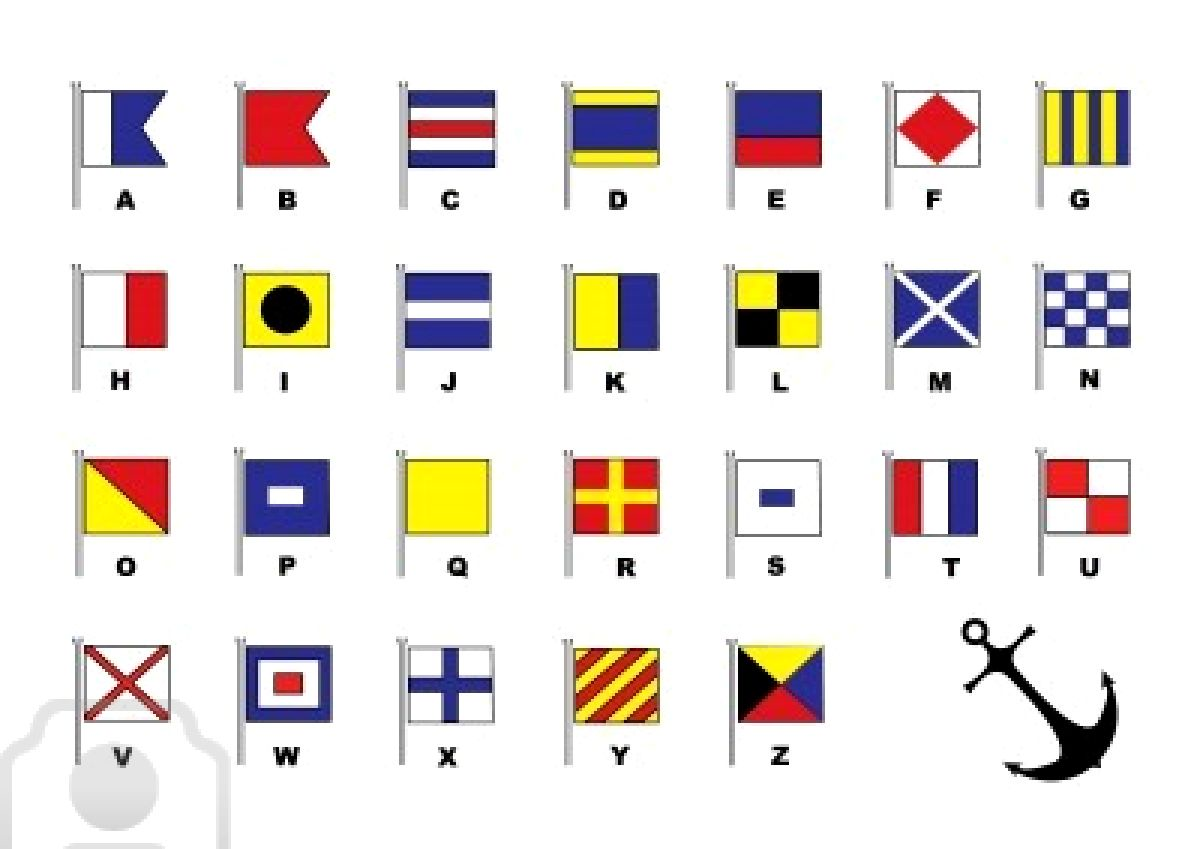 The NATO phonetic alphabet assigns code words to letters of the alphabet so that critical combinations of letters can be pronounced and understood via radio or telephone.

The Pigpen cipher, developed by the Freemasons for secret communication, encodes each letter as a symbol. The encoding is described by the grids below: each letter is encoded by replacing it with the symbol corresponding to the part of the grid that contains the letter.

Rainbow order is the order that colors appear in the color spectrum. If you see these colors in a puzzle, try reading partial answers in rainbow order. A common mnemonic to remember the order is Roy G. Biv.

When color pigments are combined, new colors are created. 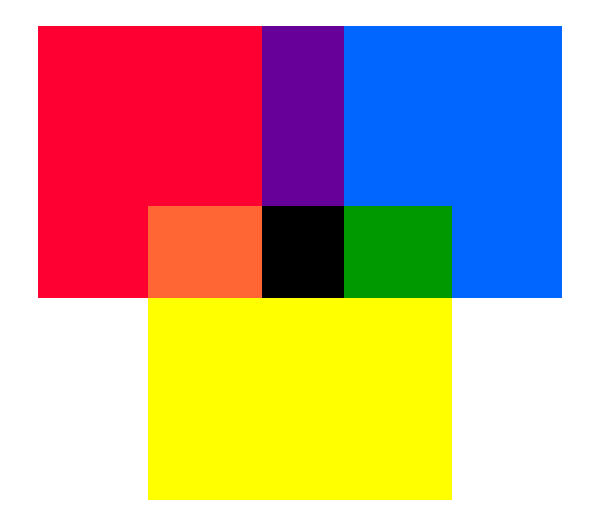 Electrical resistors use color bands on them to indicate their resistance values. This can serve as a good way to convert colors to digits.